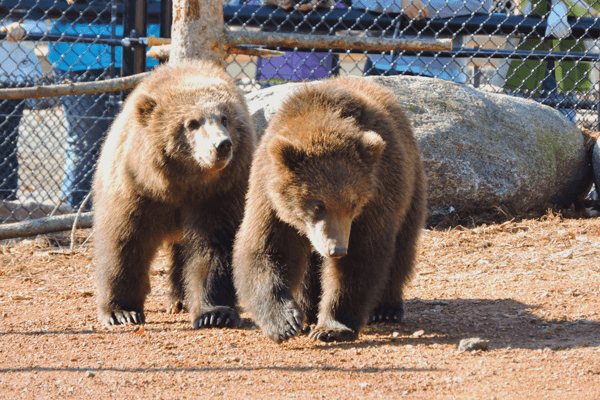 Last year was a busy one at the zoo . . . Not only did we complete our brand new, state-of-the art bear exhibit, but we welcomed its new inhabitants! The Zoo in Marshfield has always been an educational center and fun family past-time, and the expansion has opened new habitats and amenities, propelling the facility into a new chapter as central Wisconsin’s premier zoo and park.

Visiting the park is easy, as Marshfield is less than a day’s drive from anywhere in the state, sitting right at the halfway point between the Northwoods and Chicago, and the Twin Cities. The zoo is easily located on the south ridge of Marshfield and is open year round. But best of all, admission is free!

In October of 2015, the Wildwood Zoo welcomed “Munsey & Boda,” twin Kodiak bear cubs from Alaska. However, their story started 5 months earlier, when the cubs’ mother was illegally shot and killed by an unguided hunter. Although brown bear hunting in Kodiak is open through mid-May, it’s never legal to kill a sow with cubs. At 4 months old, brown bear cubs are almost entirely dependent on their mother for food and protection, and only about half make it to adulthood.

With the sow dead, the cubs had almost no chance of survival in the wild. Luckily Tim, a guide from the Munsey Bear Camp, which provides family-friendly bear viewing and photographic experiences, had been watching them with a spotting scope. After discovering their mother had been shot, Mike Munsey contacted the Alaska Department of Fish & Game and was authorized to rescue the cubs.

Tim, along with Brandon and Harry, brought the cubs back to one of Munsey’s cabins, where they stayed overnight until biologist Nate Svoboda could reach them the following day. Svoboda found the cubs hiding under a bed in the cabin, exhausted and frightened, and accompanied them to the Alaska Zoo, where they were fed, cared for and nursed back to health.

Kodiak bears are the largest bears in the world, along with their nearest relative, the polar bear. Wild Kodiak bears can grow to be 1,400 pounds and stand 10 feet tall, while captive Kodiaks have grown to be much larger. Although they are often touted as the world’s largest carnivore, they are actually omnivores. Fish is an important part of their diet, but they eat more grass, plants and berries than meat, and rarely expend the time or effort necessary to chase and kill animals. However, meeting one in the wild might not be the best time to hope they are a vegan!

The natural habitat of the Kodiak bear is in the Kodiak Archipelago in southwestern Alaska, and that’s the only place in the world where these bears exist in the wild. As one of the few zoos in the “lower 48” to be an adopted home to the Kodiak bear, we created an environment for our bears that would rival exhibits in much larger cities, such as San Diego or Milwaukee, using bridges to connect habitats in a relatively new design. A 15-foot-wide glass viewing window encourages up-close and personal bear encounters, and provides shade and shelter for visitors.

After the new exhibit was completed, and Marshfield welcomed the cubs to their new home, everyone in the community suggested names, and the top 6 were presented via survey to the public. Over 2,500 votes were received, with the overwhelming majority choosing “Munsey & Boda,” honoring Mike Munsey, who was instrumental in rescuing the cubs, and Nate Svoboda, the wildlife biologist who nursed them back to health.

BUT, THAT’S NOT ALL…

In 2015, the Wildwood Zoo also welcomed three young wolves, two males and their sister, and they are also enjoying their newly “refurbished” Wolf Compound. But the zoo family extends well beyond the new arrivals. Eagles, lynx, bison, elk, white-tailed deer and prairie dogs are among some of the popular attractions.

What remains constant is the Zoo’s commitment to its vision statement, to “Provide Marshfield and all visitors to Central Wisconsin a natural park environment and family adventure through viewing natural displays of North American animals.” So bring the family, bring friends, bring neighbors, and come see what makes Wildwood Park and Zoo special!